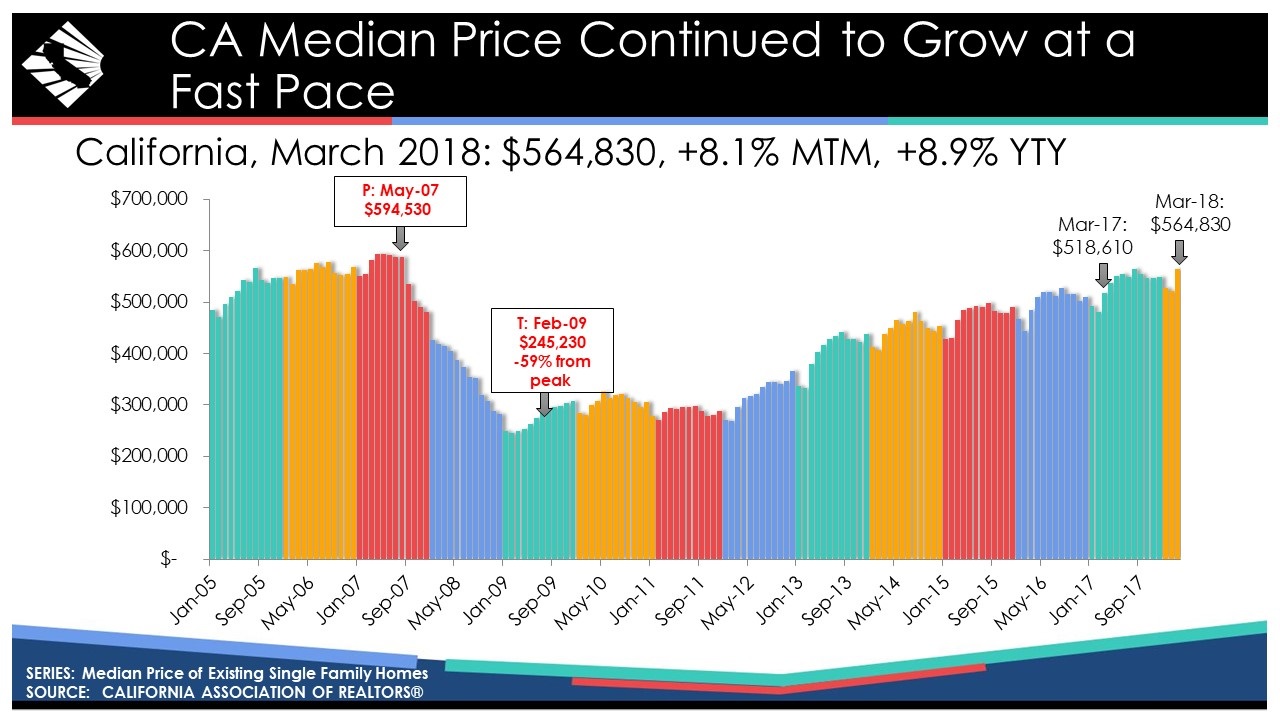 Closed escrow sales of existing, single-family detached homes in California totaled a seasonally adjusted annualized rate of 423,990 units in March, according to information collected by C.A.R. from more than 90 local REALTOR® associations and MLSs statewide.

The statewide annualized sales figure represents what would be the total number of homes sold during 2018 if sales maintained the March pace throughout the year. It is adjusted to account for seasonal factors that typically influence home sales.

March’s sales figure was up 0.3 percent from the 422,910 level in February and up 1.6 percent compared with home sales in March 2017 of a revised 417,380. The year-to-year increase was slightly stronger than the six-month average sales growth of -0.1 percent recorded between September 2017 to February 2018.

“The housing market performed solidly throughout the state in March, especially in the San Francisco Bay Area, which led the way with six of nine counties posting sales increases and the median price surging by double-digits in seven of nine counties,” said C.A.R. President Steve White. “On the other hand, sales in the Southern California region have cooled for the past five months, even in the more affordable Riverside and San Bernardino areas.”

Home prices maintained their strong growth across California, with the statewide median price jumping 8.1 percent in March to reach $564,830, up from a revised $522,440 in February and rising 8.9 percent from a revised $518,600 in March 2017. The March 2018 California median home price was the highest since August 2017, and the year-over-year gain was the largest since January 2016.

The marked price increase was partly due to a shift in sales to high cost regions and robust price growth within the high cost areas such as San Francisco, Marin, San Mateo, and Santa Clara counties. The year-over-year price gain has been growing at or above 7 percent for nine of the past ten months.

“While the decline in the number of active listings has slowed dramatically since the beginning of the year, inventory still remains tight, which is driving home prices higher,” said C.A.R. Senior Vice President and Chief Economist Leslie-Appleton-Young. “Housing demand remains strong and competition is fierce, especially in San Francisco, San Mateo, and Santa Clara, where home prices are being pushed to record levels and buyers are paying as much as 17 percent over asking price in some markets.”